Dan Avnir, who will report directly to ELF’s CEO Luke Graham, joins from Bryant Park Capital, a leading investment bank focused on M&A and debt capital markets advisory. While there, Dan was responsible for originating and executing transactions primarily in the financial services sector.  In his new role, in which he is responsible for promoting and scaling ELF’s nationwide origination efforts, Dan brings deep domain expertise in the consumer and commercial finance asset classes, along with a strong rolodex of important relationships.

Jessica Ernst and Jeff Karlsson will both report directly to ELF’s President & Chief Risk Officer John Thomas.  Jessica will take responsibility for the team’s rapidly growing portfolio.  Before her role as ELF’s Portfolio Manager, Ernst spent her career at Cadence Bank, Wells Fargo, and GE Capital where she held a variety of risk management roles in underwriting and portfolio management developing expertise in lender finance, asset-based-lending, and equipment finance.

Jeff Karlsson joins ELF as a Senior Associate on the underwriting team. Karlsson will help support ELF’s growth by providing analysis, underwriting, and documentation support to its front-end deal evaluation and underwriting process.  Prior to his joining, Jeff worked at Houlihan Lokey as a Financial Analyst in the firm’s Portfolio Valuation and Fund Advisory Services team, performing valuations of illiquid investments, and at Credigy as an Analyst where he gained experienced in consumer finance.

Denise Richardson was hired as Collateral Analyst, and reports to Janet Riccard, ELF’s Director of Operations. In her role, Denise is responsible for monitoring ELF’s customer collateral, and handling loan repayments and advances. Before joining ELF, Denise worked at Synovus Bank and UPS Capital in a variety of similar operational roles.

Luke Graham, CEO of ELF, said, “As we continue to ramp up ELF, it is critical that we add domain experts to each of the three important functions that facilitate growth – Originations, Risk and Operations.  By adding Dan Avnir, Jessica Ernst, Jeff Karlsson and Denise Richardson to our team, I am confident that we are accomplishing just that and positioning ourselves to be a best-in-class non-bank lender finance platform.” 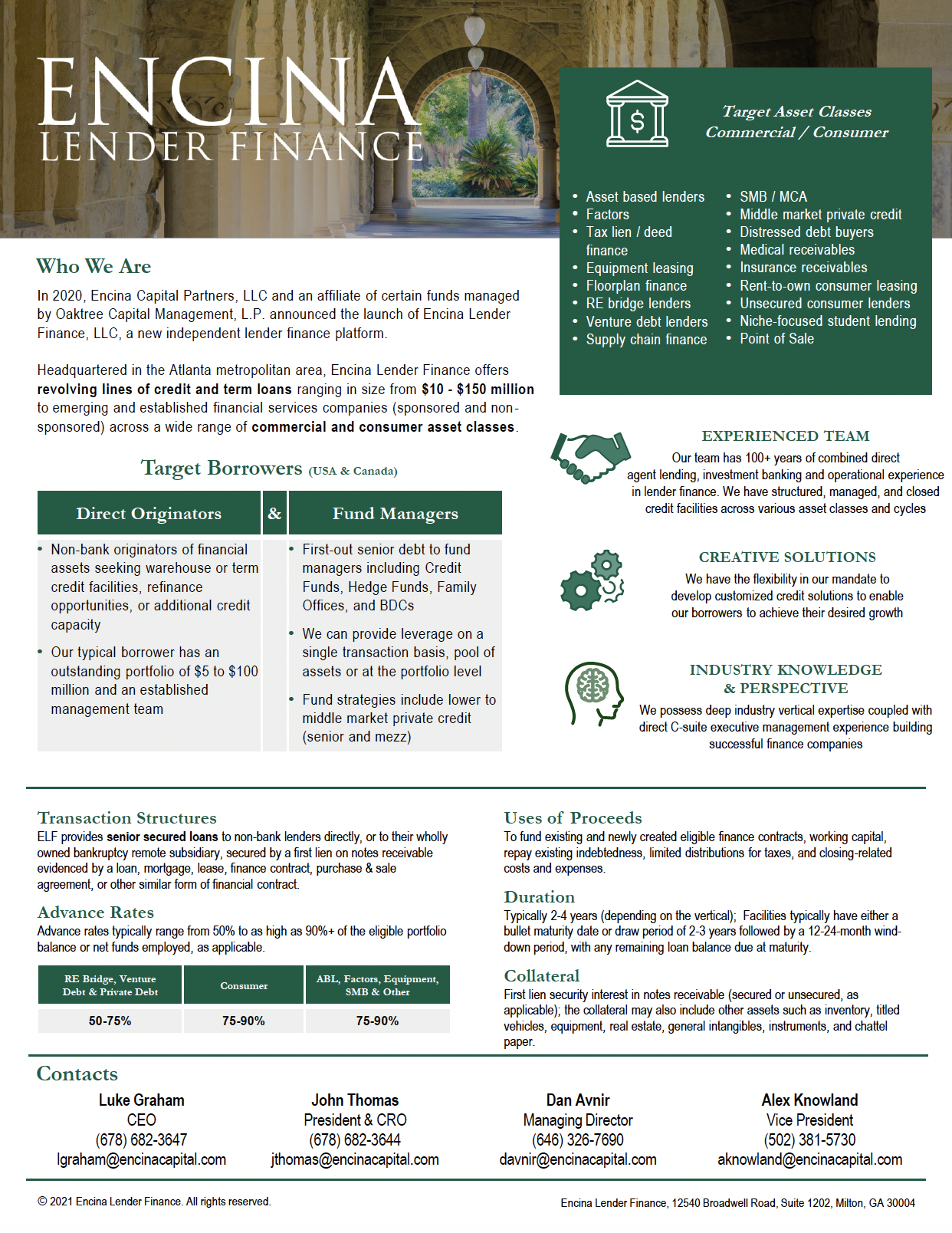